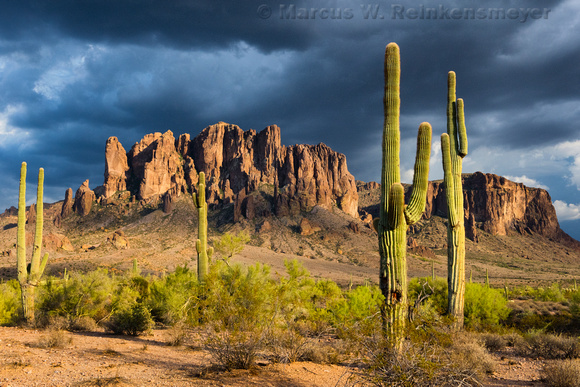 “… The winds will blow their own freshness into you and the storms their energy, while cares will drop off like autumn leaves. As age comes on, one source of enjoyment after another is closed, but nature's sources never fail.”   -  Our National Parks, John Muir, 1901 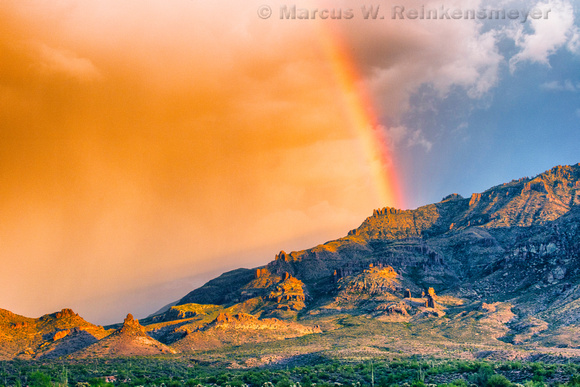 <--- Capture My Arizona Photo of the Day 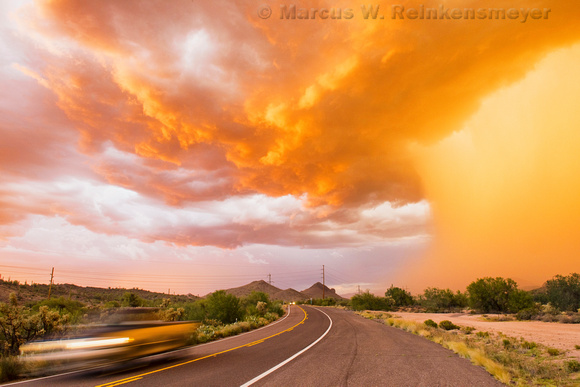 Last Saturday afternoon, I received a call from my good friend and fellow photographer, Randy Dannheim, inviting me out to shoot "the storm."  Gazing out my house window, I could see only the typical blue Arizona desert sky and a few scattered clouds. Randy explained that clouds would soon "consolidate," creating some great photo opportunities if we could just keep a safe distance from the impending downpour. 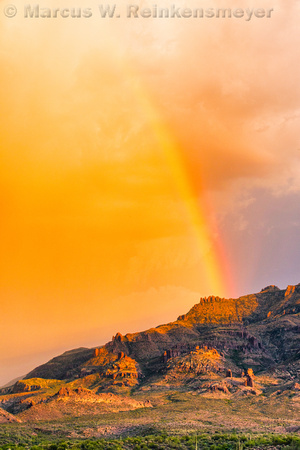 Somewhat reluctantly, I agreed to this impromptu trek, having little expectation of any dramatic weather scenes. To explain, while any opportunity for photography is always good, I've never had much luck with serious landscape photography under the harsh summer light in the Phoenix area.  How mistaken I was that day.

Driving into Lost Dutchman Park a couple of hours later, we were awe struck by the ominous dark skies over the Superstition Mountains. Our set-up and shooting at the park was fast paced and a bit hectic, lasting only 30 minutes. Gusting winds ushered in erratic spitting rain, as lightning flashes appeared on the distant horizon.   Right before us, though, the rugged mountain range was aglow in warm "Golden Hour" sunlight from the western horizon. 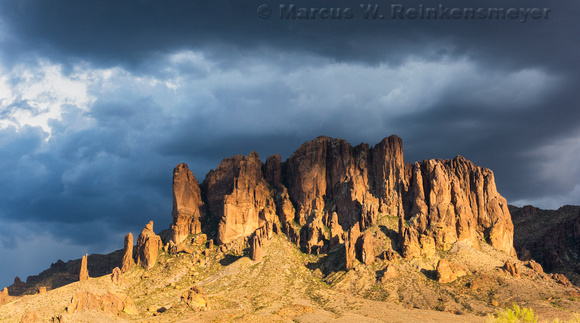 The real drama occurred a few minutes after we exited the park, driving east on AZ 88 towards Apache Lake. A faint rainbow emerged over the Superstition Mountains, seemingly demarcating the sky with vivid orange in one expanse and blue-gray in the other. 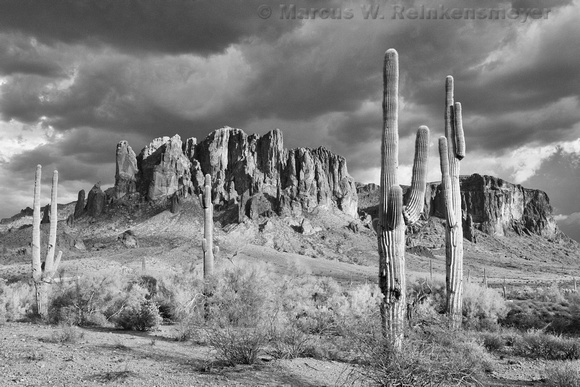 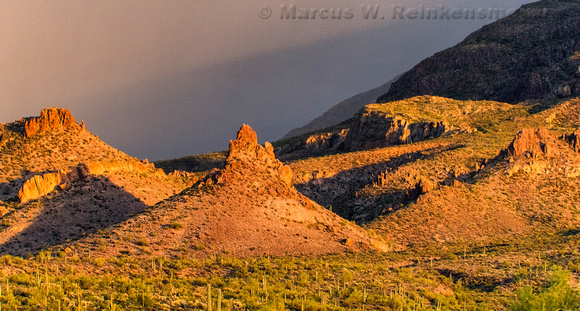 Setting up our tripods on the roadside, we took a few quick photographs of the rainbow. It was then that we were overwhelmed to see what appeared to be an advancing, vertical wall of orange dust and rain awash in an eerie glowing light.  Being from the Midwest, I immediately thought of tornado-like conditions. Here again, in a matter of minutes, strong winds and pelting rain forced us back into our vehicle.

From there, we turned around and headed home, intent on leaving the rolling foothills before the dry "wash" areas would flood with watershed from the Superstition Mountains. We encountered massive rains on our drive back home and the storm raged on well into the night.

EPILOGUE:  Randy was more "in the know" than I initially realized on this unforgettable evening.  The dramatic weather system we witnessed was, in part, a remnant of Hurricane Norbert, a tropical storm off Mexico's Baja Coast.  Massive rains ultimately resulted in a record 50 year flood in the Valley of the Sun, with Arizona's Governor declaring a state of emergency the following Monday morning.

The lesson of the day: Listen closely to your friends and daily weather forecasts.

Jeffrey Luth(non-registered)
Nice work, Marcus. I also live in Scottsdale. We should get together one day.
Gajendra S. Tyagi(non-registered)
Woww ! What a beautiful capture ;
Looks like Mother earth has Painted them for you to capture. We are fortunate to see them also, thanks for sharing.
Sarthak(non-registered)
Great photographs Marcus..!!
It's like a pool of colours been shadded by Mother Earth and its Jolly Mood and you just capture each moment of hers in a superb manner. Thanks alot for posting them..
Many More to Come .
Marcus Reinkensmeyer(non-registered)
Thanks so much, everyone, for your thoughtful comments. Mother Nature gets all of the credit. Gratefully, Marcus
Paula Lewis(non-registered)
Beautiful images. I spent many a day hiking around those mountains when I lived there as a child hoping to find the lost Dutchman's mine. Thanks for the beautiful memories!
No comments posted.
Loading...