Capture My Arizona Photo of the Day, 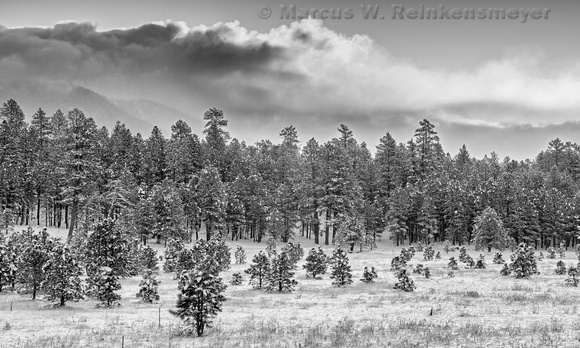 Hiking into the snow covered meadow well before sunrise, I was struck by an overwhelming silence and sense of calm.  Although it was about 9 degrees F, the air did not seem unbearably cold given an absence of discernible wind.  As my eyes adjusted to the darkness, subtle shadows gave definition to a ridge line and the snow covered hiking trail.  In the aftermath of a major snow storm, the evergreen trees and fallen branches were laced in fresh snow.

My first decision was to stay off the trail and to instead walk on the edge of the meadow, leaving no footsteps in the pristine snow. Venturing further into the meadow, I shot a few low light images to double check camera settings. 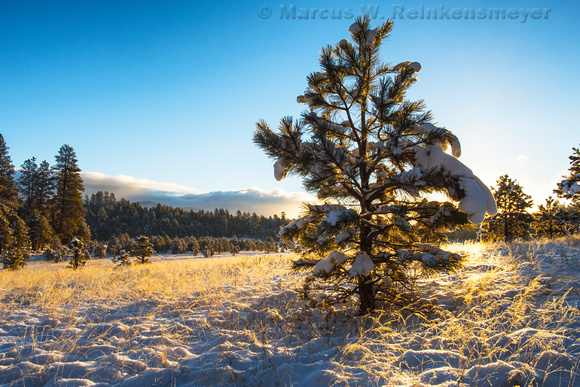 My early arrival was awarded with a brief, but remarkably intense winter sunrise in the cloudy sky.  What a stark contrast: A warm colored sky over a frozen winter scene illuminated by indirect, flat light. The resulting image is one my my favorites of Coconino National Forest, Flagstaff, Arizona (elevation, 7,000 feet). So much so that I also converted the color image to a black and white version using Nik Silver Efex Pro, a digital plug-in filter for Photoshop.

As the morning sunlight emerged over the Alpine tree line, the serene meadow underwent an instant transformation. The warm sun beams seemed so intense, creating vivid gold tones and long shadows on the satin white snow.  At this point, my shooting was a bit frenetic, knowing that this classic "Golden Hour" would last only a few minutes at best.

These kinds of moments are a photographer's dream come true, but always seem far too brief.  Such situations leave me pondering, "How could I have been better prepared for the moment, what other scenes did I miss and - with all of our advanced technology - why can't we just stop time?"  On the positive side, I learn a lot from such rushed photo shoots by later examining my camera settings and compositions. Without about a doubt, I am my own worst critic.

Photography buffs may be interested to know that this was my first time carrying two camera bodies.  Given the extreme cold and the risk of condensation, I thought it best not to change lenses in the field. I outfitted the camera bodies with different length zoom lenses (medium and telephoto lengths), remote controls and tripod mounting brackets to make transitions as easy as possible. The extra weight in my backpack was well worthwhile, considering the added degree of flexibility and ease of operation in the bitter cold.

Although I remained in the meadow until mid-morning, the best photo opportunities unquestionably occurred during sunrise and the brief "Golden" moments after first light.  What an invigorating way to start the day ...