Our one and half day photography excursion to Havasupai Falls was fast paced and energized, offering a few surprises along the way. In planning the trip, I advised our group that the falls would not be as scenic as those depicted in earlier photographs, due to a major flood which ravaged the canyon in 2008.

Fortunately, I stand corrected.  Yes, areas of the canyon were damaged and portions of the iconic waterfalls were, in fact, destroyed in the flood.  Yet, nature has a way of rejuvenation and healing transformation. New waterways and plant life abound downstream from the old Navajo Falls, the area most heavily impacted by a massive mudslide. The newly formed Rock Falls (Lower Navajo Falls) are an enchanting oasis in the making.

Our party arrived at the Haulapai Hilltop trail head (elevation: 5,200 feet) at sunrise, around 7 A.M., having lodged at hotel in the small town of Seligman on historic Route 66 (approximately 85 miles to the Southeast).   The first photo opportunities came less than a mile down the trail, with warm sunlight illuminating some buttes in the distant vista.  Much of the 8 mile trail to Supai Village is along a meandering, rock strewn wash. In several stretches of the trail, we found ourselves hiking in the shadows of tall canyon walls.  These are great areas for wide angle photography, with warm indirect light reflected from the canyon walls. 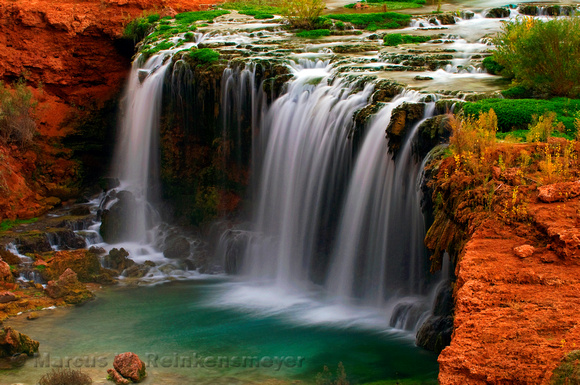 We arrived at Supai Village (elevation: 3,195 feet) in the late morning, got our hiking permits and lunch, and were on the 2 mile trail to Havasu Falls by early afternoon.  We explored and photographed the newly formed Rock Falls area, both on the way to and from Havasu Falls.  However, our best photographs of this area were captured early the next morning, with gold-orange canyon wall reflections on the terraced stream leading from newly formed Upper Navajo Falls to Rock Falls.

Before the 2008 flood, Havasu Falls (elevation: 2,800 feet) had a distinctive split flow, creating two cascades.  Havasu Falls now flows from one side of a notch, with the water flowing in a single cascade. Parts of the travertine pools were also destroyed in the flood, but the pool areas seem to be rebuilding with rapid accumulation of  calcium carbonate deposits.   In the aftermath of these changes, Havasu Falls remains  a truly scenic place beyond description. Still in my mind today: the vivid sound of cascading water and the sight of crystal clear blue-green water ... soaring canyon walls. 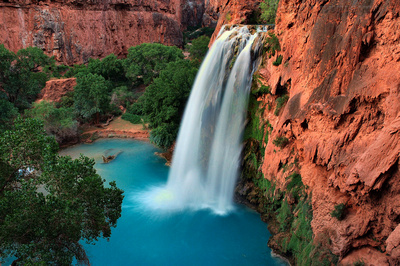 The other unexpected part of the trip wasn’t so fun. The next morning I was stung by a Scorpion not once, but four times. A painful leg injury, but no allergic reaction per se.  An elderly resident of Supai Village recommended that I make a paste of Cottonwood bark and apply this to the stings.  Despite skeptical comments from my hiking party, I followed the kind women’s instructions and enjoyed a few hours of relief with every application of the paste. Luckily, we hardly missed a beat in our hiking that day .....

Also, the helicopter ride ($85 one way) out of Supai Village proved to be a mixed bag. Lasting 10 or 12 minutes, the ride from the village to the trailhead (Haulapai Hilltop) affords a fresh bird's eye view of the canyon and a real sense of exhilaration. On the downside, we waited four hours for the helicopter ride, as village residents have travel priority. Our party could have hiked out of the canyon in this amount of time, as we did in an earlier visit, capturing some additional photographs on the way. Admittedly, though, we would have been a bit more tired and sore ... 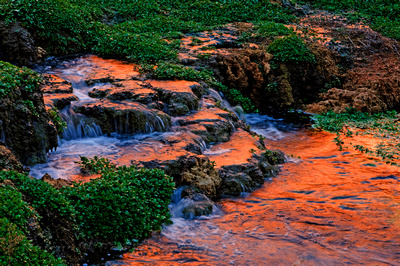 Regrettably, our tight schedule and the short daylight hours of winter did not allow us to visit nearby Mooney or Beaver Falls.  An extra day in the canyon would have been most welcome, both to visit these downstream areas  and to photograph Havasu and Rock Falls under different lighting conditions.

John Fliss(non-registered)
Thanks for sharing the changes there and continuing to make such beautiful images.
No comments posted.
Loading...