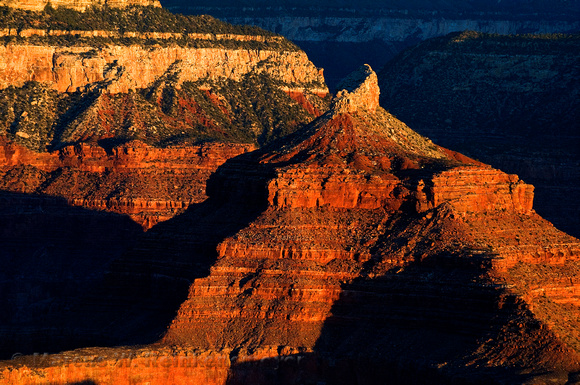 Our Grand Canyon visit was brief  - approximately 18 hours – but highly productive in terms of landscape photography. Traveling from Havasupai Falls,  we arrived at the Grand Canyon National Park entrance (South Rim) around 3:30 PM.  Our first stop was at Yaki Point for a brief hike down the Kaibab trail. This hike was for the benefit of our out-of-state guests, mainly to get a sense of the canyon trail descent and the amazing layers of exposed geology along the way.

For the evening “Golden Hour” photo shoot, we set up at Hopi Point, an especially photogenic rim location on the West end of the park.  Our greatest challenge was finding  a parking spot, as this popular area was overflowing with cars and people … even in the January off-season.

Initially, I was disappointed to see clear blue skies, without a cloud or a hint of pattern. As it turned out, however, the early evening winter cross lighting bathed the canyon walls in warm tones, rendering a high level of detail.

Just after the sunset, as I was starting to pack my camera bag, a horizontal layer of vivid pink color appeared in the sky. This cast a distinctive reddish light on the canyon walls, akin to the alpenglow seen on the summits of snow covered mountains at sunrise or sunset.  Fortunately, the pink sky remained for approximately 20 minutes, allowing us to set-up and capture some fresh canyon images in the warm light.

The next morning came around quickly enough, as we set up in the pre-dawn light at Yavapai Point at approximately 6:30 AM. Our challenge here was the intense cold and strong winds at the fully exposed overlook - elevation approximately 7,000 feet (2,135 m). It was 17 degrees, but actually felt much colder given the wind chill factor.   We found it helpful to place Grabber “Peel N’Stick” (registered trademark) hand warmers in our gloves and boots.

Convertible mittens with “fingerless” gloves are also “a must” for operating camera and tripod controls in freezing conditions.  A new “Etip” (registered trademark) glove made by The North Face is designed to allow gloved operation of cell phones, cameras and other electronic devices. We have not had an opportunity to test this product. 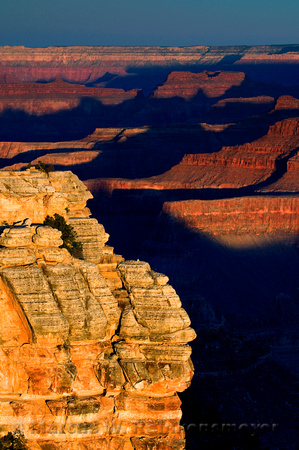 Although we noted some bands of clouds in the Eastern sky, the sunrise seemed to occur very quickly.  Whole sections of the canyon were suddenly transformed from dark shadows and soft purple tones to an intense red-orange color, almost too bright to photograph. After shooting a few wide angle vistas, I switched to my Nikkor 70 – 200 mm lens, seeking to capture more tightly composed images of a single mountain ridge and the interplay of shadows on a canyon wall.  The resulting images lack the classic landscape foreground and middleground layers, but in some ways better depict the dramatic transformation from pre-dawn to blazing daylight.

Photographing the Grand Canyon in these rapidly changing lighting conditions, it’s hard to comprehend and even more difficult yet to capture the vastness of the canyon. On my first few trips to the canyon, I somehow felt a bit guilty and  “lazy” setting up my tripod at the touristy overlooks areas. After all, we photographers often look askance at the “drive by” shooters lined at roadside pull-outs, especially with the firing of automatic flash units.

Having just returned from Big Sur, California, I have a new appreciation for such “convenient” photography locations. While a hike along the coastal cliffs can afford new perspectives, some of our favorite photographs from the California trip were, in fact, shot from designated roadside pull-offs. And so it is with the Grand Canyon, one of the world’s seven wonders offering unsurpassed photography opportunities,  both top side on the rim and on less traveled trails. 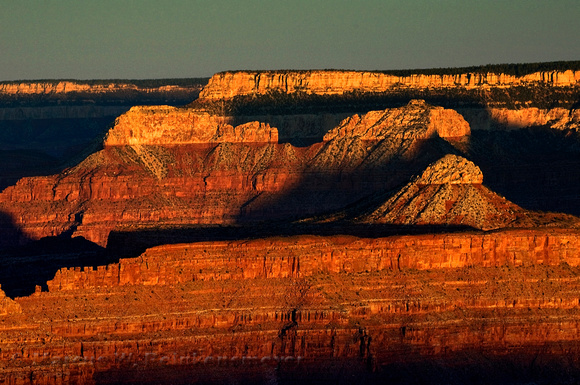 A few other notes regarding canyon photography:  Circular polarizers are a must at the Grand Canyon and the Southwest generally, as they reduce glare on canyon walls and help to cut through the haze. The only caution is to guard against overly dark blue skies, by dialing down the level of polarization. We’ve found it’s best to shoot a series of any given scene with full and partial polarization.  Use of  lens hoods is also strongly recommended to eliminate stray light and lens flare in cross lighting situations.

We also found it helpful to use handheld .6 and .9 graduated neutral density filters, to darken the  skies and create more even overall exposures. Finally, I’ve found it most worthwhile  to bracket for 3 – 5 exposures of each scene, using the auto bracketing function on the camera.  Because it’s difficult to view the photographs on the small camera display in the field, the photographs with best exposures are better identified on computer monitor in RAW mode.

Numb with coldness and wind burned to the max, we headed out of Grand Canyon National Park around 8:30 AM.. That said, my brother Brian and I left the park with a great sense of satisfaction, having experienced another unforgettable morning at the South Rim.

Our travel itinerary and images from the four day Whirlwind Photography Trek to Northern Arizona and Utah.