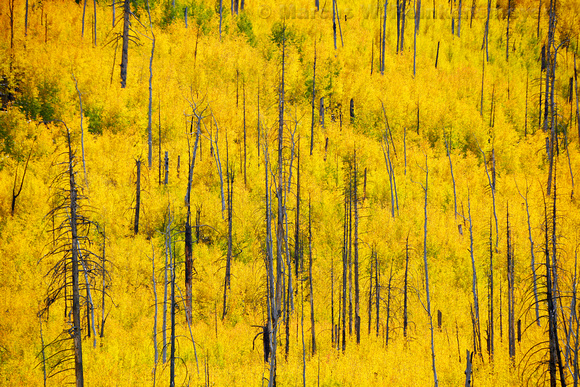 A couple of weeks ago, we traveled to Sedona to capture some autumn colors in Oak Creek Canyon.  As it turned out, it was still quite warm and we were way too early for the colors. One of the friendly volunteers at the Sedona visitor center suggested that we instead head up to the higher elevation mountains in Flagstaff (elevation 8,500 feet). After passing through Flagstaff about an hour later, we were most grateful for this great advice.

Image voted Capture My Arizona's "Photo of the Day"

Just outside of Flagstaff, we found several dense Aspen groves in early Fall transition. These areas displayed an intriguing interplay of green and yellow-gold leaves.

Driving slowly along the ten mile Hart Prairie Road loop (FR 151), it was delightful approaching intense color bursts from the distance - along the roadside, up a hillside and crisscrossing a man made fence line.

The real surprise of the day came near the end of the drive, a few mile before we returned to main road (SR 180).  There, a vast Aspen grove had come to life along a mountainside previously ravaged by fire. The Aspen foliage seemed particularly radiant, given the intense late afternoon back lighting. 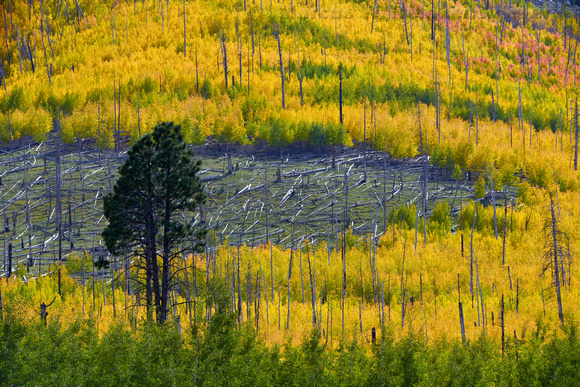 Taking all of this in, I was once again struck by nature's power of regeneration and the cycle of life.  Given all of the forest fires across the Southwest United States this past summer, it was encouraging to see the this new life and resilience of nature. The cycle of life, celebrated in every change of seasons.

In one of the quiet and nearly windless Aspen Groves, I also the opportunity to experiment with a hyper focus technique, shooting a series of images of the same scene at differing focal points to capture maximum  depth of field. The images are captured using manual focus.

The hyper focus process requires that the camera be mounted on a sturdy tripod (with no movement in the scene) and that the exposure be locked in at a single given setting for the complete series of images.

Using Helicon Focus software, the images are intelligently combined to create an image with full depth of field.

Although I am still experimenting with this process, the results of this photo shoot were pleasing.  I have much more to learn about this whole process and will provide a follow-up posting. 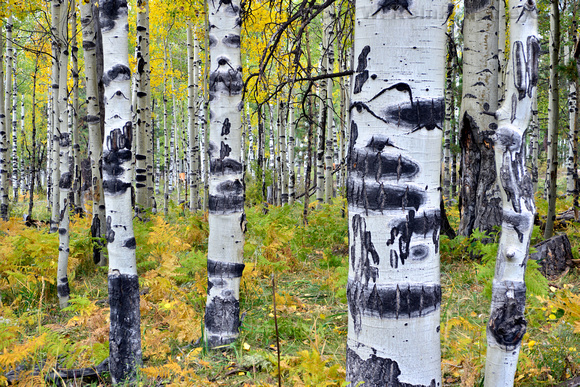 Image created using a series of seven photographs with different points of focus, intended to capture the maximum depth of field from the front to the back of the image. Helicon Focus software was used to combine the multiple images, creating this photo.

Marty Vance(non-registered)
Look at the Aspen tree trunks in the compilation photo. They seem to have faces and personalities, due to this extremely effective process. I was in that area during the same weekend and the brillance of nature is captured very effectively, just as I remember those scenes.

Congratulations on this fine job!
Irene(non-registered)
Almost as nice as our Michigan Fall! Beautiful!
Donna(non-registered)
Absolutely breathtaking. There is hope for all life when you see how Mother Nature
can regenerate herself.

Thank you so much for sharing your beautiful pictures.
No comments posted.
Loading...